Is there a relationship between community prosperity and foreign-born populations? 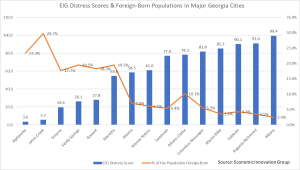 I’m a messy and disorganized researcher.  Within an hour or so after diving into a new piece of research my desk and the floor around me are littered with scraps of paper and notes.  I’m also easily distracted.  I’m bad about being drawn to bits and pieces of information that aren’t central to what I’m trying to focus on.

It happened a week or so ago when I was mucking around in a mega-spreadsheet of data shared with me some months back by the Economic Innovation Group (EIG)[i], a Washington think-tank that has studied and ranked all the counties and cities (with populations of 50,000 or more) in the country on various metrics measuring prosperity and, more specifically, “distress” on a community.

For some reason, my eye kept drifting out to column AF, the 29th and very last column on the far right-hand edge of the spreadsheet.  It showed the percentage of foreign-born population for each community.

The reason it kept catching my eye was that it seemed, in my casual observation as I was working on my last post, that communities with higher percentages of foreign-born residents were doing better than those with lower percentages.  I noticed, for example, that the foreign-born population in Albany, which has the worst Distressed Community Index (DCI) score of any city in Georgia (and one of the worst in the country), was less than three percent of the total population.  In contrast, Alpharetta’s population is 23.3 percent foreign-born and it posted the best DCI score in the state.

So, I decided to take a deeper dive.  I’m not trained as a statistician, so I’m not prepared to say there’s a correlation, let alone a causal relationship.  But there are absolutely some interesting patterns.  A more comprehensive look at all the Georgia cities included in EIG’s dataset provides one (those with populations of 50,000 and up), as this graph shows.

Then another comparison occurred to me.  In December 2016 I wrote a piece contrasting Gwinnett County to all 56 counties of interior South Georgia.  That contrast was not charitable to South Georgia.  Among other things, I found that Gwinnett County, with only about three-fourths the population of the 56 South Georgia counties, generated 22 percent more in personal income and nearly 50 percent more in federal taxes.  At the same time, it consumed substantially less in social services – less than a third as much in Medicaid costs, for example.

At the time, I wasn’t looking at immigration or foreign-born populations or even thinking about whether there was a relationship between immigration and the overall prosperity of a community.  But, for what it’s worth, it turns out that Gwinnett County has the second-highest proportion of foreign-born residents in the state, 24.7 percent.[ii]  Its overall distress score is 9.0, which puts it 10th in the state and 282nd in the nation.  Gwinnett also does well in other rankings – 15th best in the latest Georgia Department of Community Affairs (DCA) Job Tax Credit Rankings[iii] and 5th in the Robert Wood Johnson Foundation’s latest county rankings for health outcomes.

The proportion of foreign-born residents in the 56 South Georgia counties works out to 4.2 percent – fewer than 50,000 people altogether – not even a fourth of the 216,000 foreign-born residents in Gwinnett County.  More than 100 languages are spoken in Gwinnett County’s public schools, which, not for nothing, is the only school system in America to win the prestigious Broad Prize for education twice – first in 2010 and again in 2014.

Gwinnett County is, in fact, already a majority-minority county.  Only 40.3 percent of the county’s population is non-Hispanic white; blacks make up 25.4 percent of the population; Hispanics, 20.5 percent, and Asians or Pacific Islanders, 11.1 percent.

The same sort of picture emerges when you look at this through the prism of my “Trouble in God’s Country” regions.  My 12-county Metro Atlanta region, which generates the lion’s share of the state’s economic output, is home to about 47 percent of the overall population but nearly 72 percent of the foreign-born population.  As this table shows, Metro Atlanta is the only Trouble in God’s Country region where the percentage of foreign-born residents hits double digits.

Now, this is not to suggest that an infusion of foreign-born residents into a local population is a guarantee of improved economic and civic conditions.  You can absolutely find examples of communities with low percentages of foreign-born populations that are doing well.  And there are differences between the groups of cities shown in the chart above that should be acknowledged.

Geography is one.  All the cities with high distress scores and single-digit percentages of foreign-born residents are located from about the gnat line south; all the cities with low distress scores and double-digit percentages of foreign-borns are clustered across Metro Atlanta’s prosperous northern arc (as is Gwinnett County, and, for that matter, Cobb County, whose profile is fairly similar to Gwinnett’s).

So it may be that immigrants finding their way to Georgia migrated naturally to the most prosperous areas.  Or it may be that they don’t like gnats.  I blame the gnats.

[i] Much of the raw data used in this post, and in the chart above, was provided to the author under license by the Economic Innovation Group (EIG), but the analysis and observations are entirely my own – as are any errors I might have made.  EIG does not guarantee the accuracy or reliability of, or necessarily agree with, the information in this article.

[ii] The only county with a higher percentage of foreign-born residents than Gwinnett is hapless Stewart County, in southwest Georgia.  The nearly 1,700 foreign-born residents there constitute about 29 percent of the local population, but you probably wouldn’t know it from walking down the street in Lumpkin, the county seat, since virtually all of them are locked up in a federal Bureau of Immigration and Customs Enforcement prison.

[iii] The Georgia Department of Community Affairs issues Job Tax Credit rankings each year, based on a formula built around local per capita income, poverty rates, and unemployment rates.  Because the purpose of the program is to try to drive economic development in Georgia’s poorer areas, it ranks the counties from worst to best.  On that list, Gwinnett County ranks 145th.  For my purposes, I reverse the DCA list to produce a best-to-worst ranking.